The Pondicherry Co-op. Milk Producers’ Union Ltd. (hereinafter called Ponlait) had commenced its functioning from 07.02.1955 as Pondicherry Co-operative Milk Supply Society and was marketing the milk to the urban consumers only.

In view of processing the milk procured from the villages before delivering same to the urban consumers, a milk processing plant with 10,000 litres capacity was installed with the help of National Dairy Development Board in 1971.

There are about 41,221 Milk Producers who enrolled themselves as members in the societies functioning at village level, of which around 7,525 milk producers are in active participation at present.

The average milk procurement by Ponlait from the Milk Producers’ Co-op. Societies every day is 79,000 litres and the same is collected through 25 Bulk Milk Cooling Centers installed across Puducherry Region after subjecting the milk for instant chilling to maintain quality. About 25,000 – 27,000 litres per day are out sourced from the neighboring states to meet the market demand.

Ponlait effects payment to the Milk Producers on fortnightly basis based on the quality of the milk supplied by them (For FAT 4.2%, SNF 8.3% milk the rate is Rs.34/- per litre which is Re.2/- more when compared with Tamil Nadu Milk Procurement Rate) w.e.f 30.08.2019.

The milk is transported through refrigerated tanker vehicle from the villages to the Dairy Plant and unloaded for processing after checking the quality.

The milk is pasteurized, homogenized and standardized at the Dairy Plant before it is packed, stored and delivered to the consumers as per the Food Standards.

The processed / manufactured milk & milk products are stored at required temperature at Dairy and transported to sale points across Puducherry.

The milk and milk products are sold to the consumers around 200 Agents and through 70 Ponlait owned Parlours. For distribution, vehicles are engaged through Closed Tender System / e-Tender System.

On an average the liquid milk marketed by Ponlait in Puducherry is 1.0 lakhs litres per day which includes sale to the General Public, supply to Hospitals, Hostels, Educational Institutions, etc.

Ponlait manufactures Amul Brand Ice-cream varieties on franchise basis since 2009, an agreement is executed for this purpose with the Gujarat Co-op. Milk Marketing Federation Ltd. (GCMMF). Initially Ponlait had started manufacturing and supplying Amul Brand Ice-creams of about 3000 litres per day in 2009 and it has now increased to around 9,000 litres per day in April 2016.

Ponlait is establishing an Automatic Stick Line Machine for manufacture of Amil Ice-candy, Chocobar, Kulfi in a large scale manner. Ponlait had sustained loss during the past years due to non-revision of milk selling price for long period and Ponlait has now recouped the accumulated loss of Rs.1.76 Crores. Th annual business turnover of Ponlait has reached Rs. 192 Crores during the financial year 2019 – 20.

Ponlait is always committed in delivering the goods and services to the consumers and it is endorsed by the Food Safety and Standards Authority of India by publishing the news in the Times of India Newspaper that the milk supplied by Ponlait is the purest milk from among the Co-operative Dairies through India in 2012.

Ponlait availed the financial assistance from the Co-operative Department, Govt. of Puducherry for Dairy expansion activities and for 75% Cattle Feed Subsidy Scheme to benefit the milk producers. Consequently, the milk production has increased considerably. Funds are also availed through Centrally Sponsored Scheme of RKVY for infrastructure development, which are highly necessary for effective manufacturing / conduct of business. 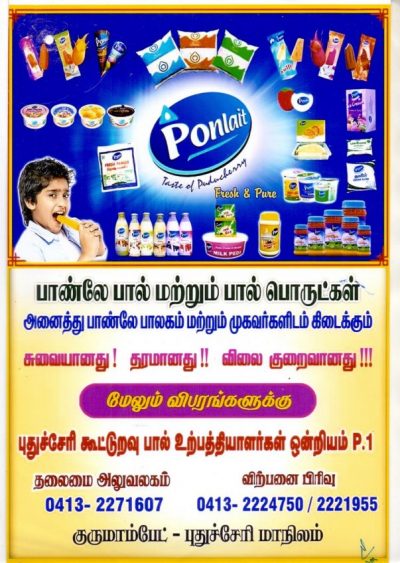